Terra Chá, top gun in Galician wind power within a context of human and economic deterioration

The municipalities of Abadín, Begonte, Castro de Rei, Cospeito, Guitiriz, Muras, A Pastoriza, Vilalba and Xermade make up the Region of Terra Chá, in the province of Lugo.
In 2020, this approximately 1800 km2 area was inhabited by nearly 40,000 people.
Like many other regions in the interior of Galicia, these lands have suffered a population drain over recent decades. As of 1998, this region has lost 10,000 inhabitants at an average annual rate of 1% representing 20% of its initial population. In fact, this rate of population decline is beyond the Galician average. In 1998 the “Chairegos” and “Chairegas” represented 1.82% of the Galician population; 22 years later, in 2020, they only accounted for 1.47%.

As its inhabitants know full well, Terra Chá is far from being among the most developed regions of Lugo or Galicia. Its problems are manifest: unemployment, aging, lack of good public services, etc. Even when using well-known indicators like Available Income, i.e. income actually retained in the pockets of its people, the inhabitants of Terra Chá fall well below the Galician average. We already know that the Galician average is nowhere near the average of the Spanish State and the Spanish average falls very short of the European average. Hence, the conclusion is straightforward: in relative terms, the quality of life in Terra Chá is much worse for its 40,000 inhabitants than it is for inhabitants of other territories (as measured by the aforementioned indicator. Please see the attached graph). 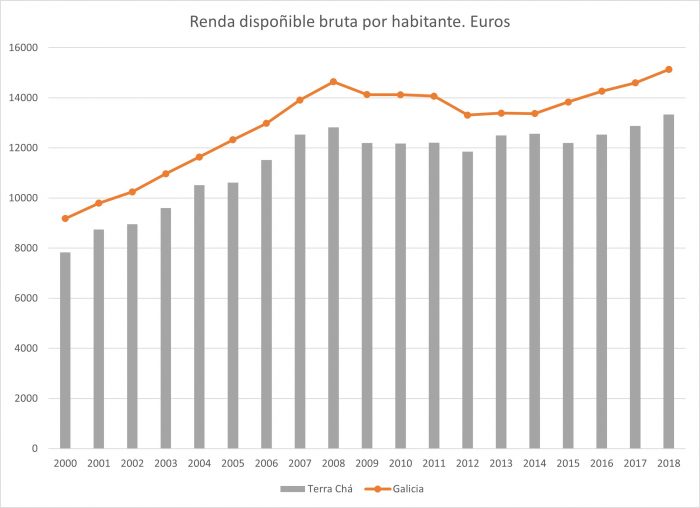 However, this region is the Galician champion in terms of installed power and renewable electricity production from wind. Let’s look at 4 basic data:

When a territory does not seek local, regional or national self-sufficiency, it specializes wherever its advantage rests. This might be the endowment of natural resources, the formation of its human capital, its geostrategic position, etc. When it is the market that makes these decisions, important asymmetries arise in terms of economic well-being, distribution of social and environmental costs, and quality of life. Thousands of examples support this fact. Governments sometimes try to correct this situation, but few get it right because their measurements are weak.

Clear examples of those asymmetries may be seen in Terra Chá. This region has contributed to mitigating climate change with an abundant production of renewable MWh. Yet this has not implied any change in its historical trends in terms of the abandonment of agrarian resources, depopulation of villages and general loss of population. Governments, especially the Galician government, have done nothing to make amends even despite the great opportunity derived from the existence of endless wealth in the “Chairego” mountains.

If the multinational company projects in the pipeline move forward over the coming few years, hundreds of new MW will reach these lands. However, will the trends in the economic and social deterioration of these lands change? We think that the Galician and Spanish governments must urgently change their policies so that the response is not the same as it has been over the last 25 years: “they come from afar to take advantage of the renewable resources of our lands; yet for us only the problems remain.”