Entitlements and reservations for a prize race: the performance of Enel Green Power Spain in the northernmost regions of Galicia

Over recent weeks, Enel Green Power Spain together with Iberdrola, Naturgy, EDP and Greenalia have all led the rush for large wind farms in Galicia. Specifically, Enel Green Power Spain has in process, among others, the 611 MW Western Coruña macro wind farm with 128 wind turbines, 122 kilometers of high voltage line (HVL), 446 support points for this HVL and an investment of 579 million euros. This wind farm would be located inside two provinces (Lugo and La Coruña) and 12 municipalities: A Capela, As Somozas, Cabanas, Cedeira, Cerdido, Fene, Guitiriz, Moeche, Neda, San Sadurniño, Valdoviño, Vilalba and Xermade.

Enel Green Power España, a subsidiary of Endesa, recently submitted a request for prior administrative authorization and environmental impact assessment for 6 different wind farms and their evacuation infrastructures. We are specifically referring to the wind farms Tesouro, Caaveiro, Barqueiro, Badulaque, Santuario and Moeche. The promoter presents the requests individually. However, we must underscore the following.

In sum, everything seems to indicate that we are facing a large and unique wind farm that the promoter presents separately. Together or fractionally, this infrastructure would be subject to the common validation of the environmental impact. Yet studied separately, the environmental impact of these wind farms can mask or attenuate the potential synergistic and cumulative impacts of an infrastructure of this size/dimension on the territory, ecosystems and local communities.

Wind farms outside the Wind Development Areas and wind turbines on reserve.

As we have already explained in other parts of this blog and in the Owner’s Guide, in Galicia wind turbines may only be placed within the so-called Wind Development Areas established by the Galician Wind Sector Plan. In Enel’s proposal, the entire Caaveiro, Badulaque and Santuario wind farms are outside the WDAs; in the case of Barqueiro, 25 of its 30 wind farms would also be outside the WDAs; and in Tesouro this would account for 50%. Moeche would be the only proposed wind farm with all of its wind turbines within a WDA. 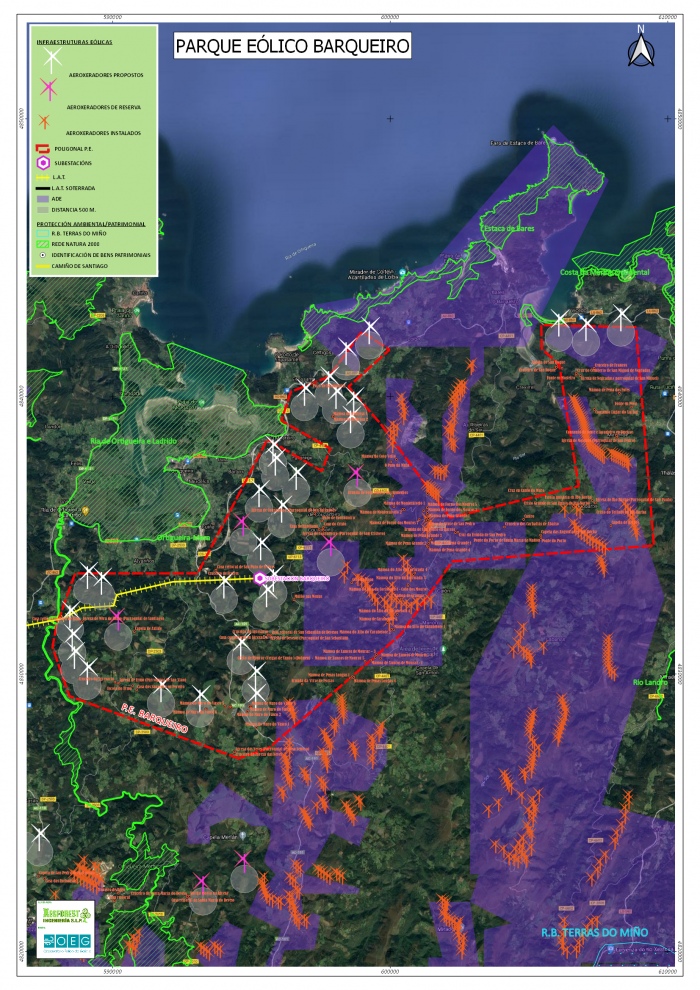 In these situations, the Xunta de Galicia must take the initiative. It should have submitted an unfavorable report to the wind farms that do not comply with the regional standard. However, all of these proposals have already passed the first phase of the environmental assessment. GWO’s has more than enough knowledge on hand to ascertain that this report has already been presented for the Caaveiro wind farm. However, we do not know if this is so for the remaining wind farms. In addition, the Xunta de Galicia should be present and intent on its unfavorable reports throughout the prior authorization phase like those of Caaveiro and Tesouro, as well as any of those pending approval. 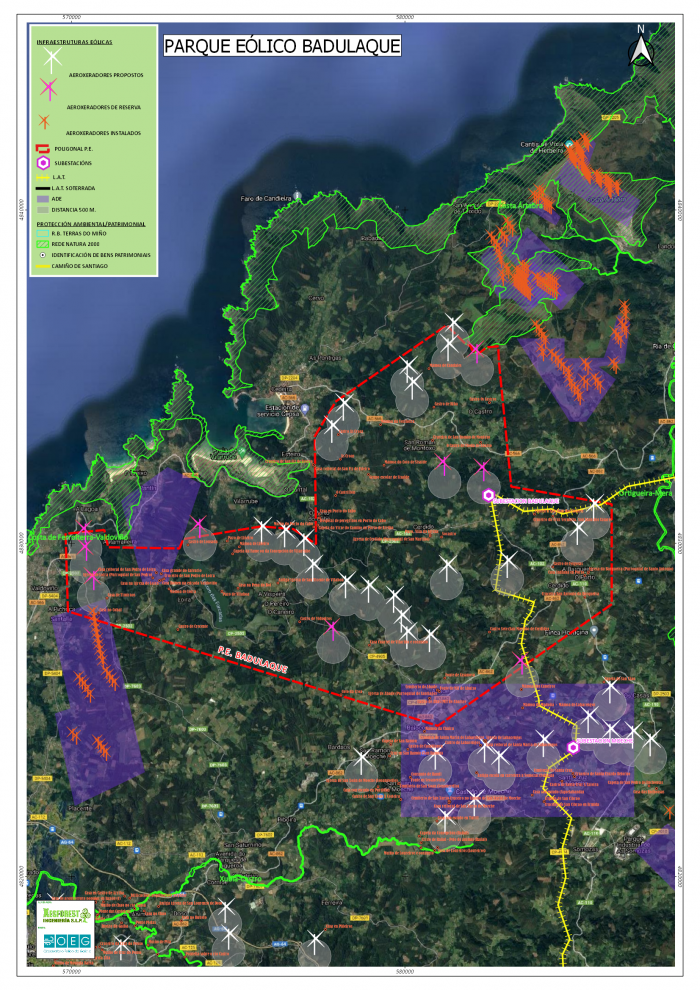 An investment activity of this caliber has a superlative territorial impact, not only for the size of its wind turbines or the total installed power, but above all for the way it extends over vast areas of the territory throughout several counties in A Coruña and Lugo. This would represent a significant impact on cataloged heritage elements as well as on others remaining to be cataloged. All precautions must be taken to conserve them; absolute limitations must be set to safeguard, protect, and guarantee the conservation of elements like these that are so abundant throughout this territory. Short of comprehensive, a quick review of these impacts places the Croas Hillfort and the Lousada Hillfort as elements affected by the Badulaque wind farm; the Muro Megalithic Mound is affected by the Barqueiro wind farm; Marraxón Megalithic Mound, Ancos Hillfort and Alto da Serra Megalithic Mound, are cataloged elements severely affected by the Caaveiro wind farm; Caneiros Megalithic Mound and, above all, Moeche Castle, are elements affected by the wind farm bearing the name of the castle; the Santuario wind farm, the largest of those contemplated in this macro request from Enel, would also be (see the attached plan) the wind farm having the greatest impact on heritage elements and, thus, the one potentially having the greatest landscape impact; finally, Tesouro, the smallest of the proposed wind farms, would directly affect the Pico Castro Megalithic Mound. 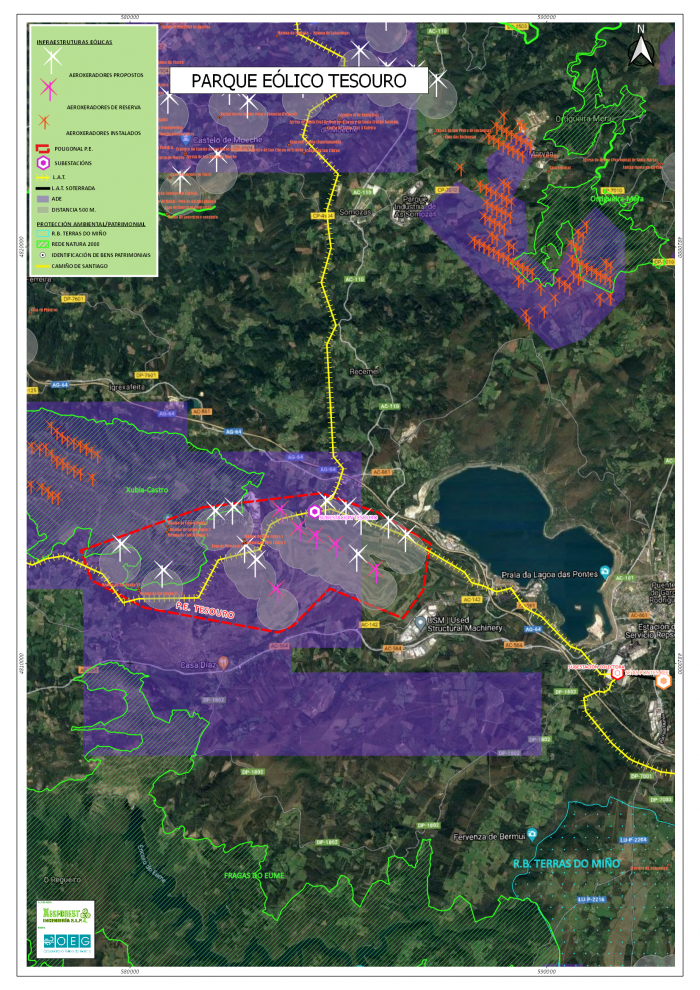 These effects only refer to wind turbines. Precautions and limitations should include the effects of power lines, internal wind farm communication tracks, and evacuation lines. As noted above, these will extend over 120 kilometers and have nearly 450 supports. Needless to say, the impact on the territory will be far more than additive; these infrastructures will have a cumulative and multiplier effect.

Far from intending to carry out an environmental analysis of these wind farms and their related infrastructures, their cumulative and multiplier effects are much more evident environmentally than in terms of culture and landscape.

The Tesouro wind farm has wind turbines and infrastructures embedded directly in the Xubia-Castro area of the Natura Network, without considering any possible transition zones between this highly protected environmental space and its surrounding areas. Santuario, on the other hand, is located entirely within the Terras do Miño Biosphere Reserve; its wind turbines and their infrastructures would surround the Parga-Ladra-Támoga Natura Network area in the North, East and West. As can be seen in the attached plan, the infrastructures of this wind farm penetrate directly into the spaces included within this environmental element of high ecological value. For their part, the Moeche and Caaveiro wind farms would affect the Xubia-Castro Natura Network area.

The Barqueiro wind farm would place the wind turbines in the furthest northern point of Galicia, occupy previously untouched spaces and would have a first-rate impact on the environment and landscape by locating the energy infrastructures near the Ría de Ortigueira and Ladrido Natura Network areas as well as the nearby Estaca de Bares. the Punta Maeda wind farm was admitted for processing in 2006 in the WDA called Estaca de Bares, located north of the northernmost positions of the Barqueiro proposal. It was authorized in 2011, but remains unexecuted. 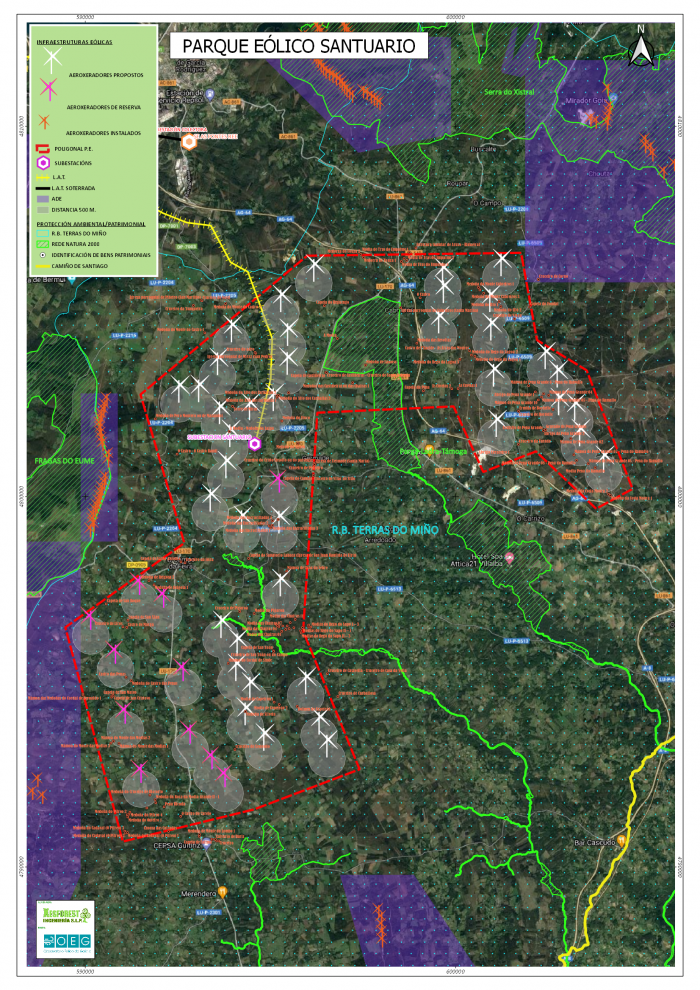 After consulting with the GWO legal team, we conclude that these wind farms require a significant modification of their structural configuration to meet all the requirements for an administrative authorization; their definition must undergo profound transformations to mitigate environmental and territorial effects.

Despite this conclusion, GWO wants to share with its readers a brief reference to the areas associated to urban change and the so-called areas excluding competitors. We will use the Barquero wind farm as an example.

Galician regulations establish that the Council of the Xunta de Galicia will approve the consideration of the sectorial wind farm proposals as project of supramunicipal incidence. The change of the urban classification of surfaces affected by the wind farm is among the derivatives of this fact. This change is linked to ditches, transmission lines, substations and wind turbines. In relation to the latter, an urban change is established within a radius of 200 meters around each wind turbine. This represents 12.5 hectares, such as those shown in the attached plan, for each turbine that will change from “rustic” to “rustic for the protection of infrastructures” classification. 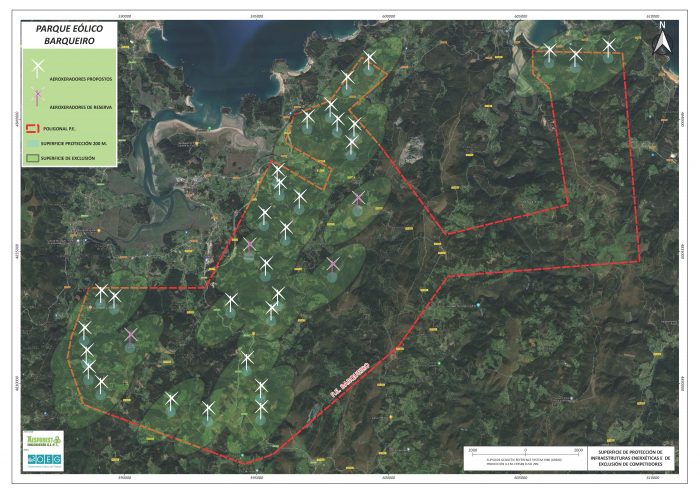 This map shows the exclusion zone of competitors linked to each of the wind turbines. You can see the 30 wind turbine “entitlements” and the 4 “reserves”. Initiating the processing of a wind farm in Galicia comes with a prize: it excludes third parties from petitions in areas of influence. In these areas (established at 10 and 4 times the sweep diameter in the first and third and second and fourth quadrants, respectively) the developer acquires exclusive and monopolistic rights: no one may develop another wind farm without the consent of the developer. In the case of Barquero this would represent 8,086 hectares.

Many derivatives of these two phenomena go beyond the scope of this informative note. Let us simply mention that the List of Affected Property and Rights published upon a developer’s request for the declaration of the public utility of a wind farm is always a fraction of the affected urban area and a much larger fraction of the area excluding competitors. This is not yet the case for any of the 6 aforementioned Enel wind farms.

These wind farms would have an astronomical production relative to the existing average in Galicia. The highly available resource in these positions and the high-generation technology incorporated in the planned wind turbines (sweeping area 170 meters in diameter and a bushing height of 115 meters) would make them the planned wind farms with the highest power factor – always over 3,800 annual production hours and around 5,000 annual hours for Barqueiro and Badulaque. 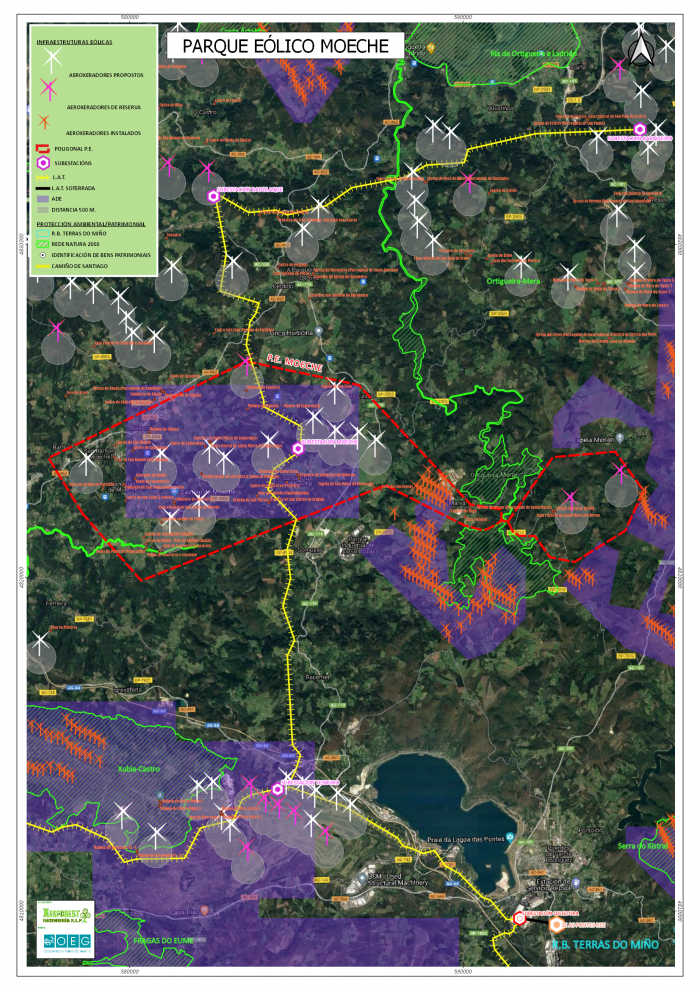 Peculiarities: 18 kilometers of buried lines for 10% of the power

We do not want forget to highlight some peculiarities about the enormous territorial impact of the planned wind farms. The case of Barqueiro is especially significant: the three easternmost wind turbines are located more than 18 kilometers from the wind farm substation. That is to say, this distance must be “occupied” by infrastructures for conducting and transporting electricity to the substation. This extensive occupation may be associated to the objective of casting out competitors, as discussed above. 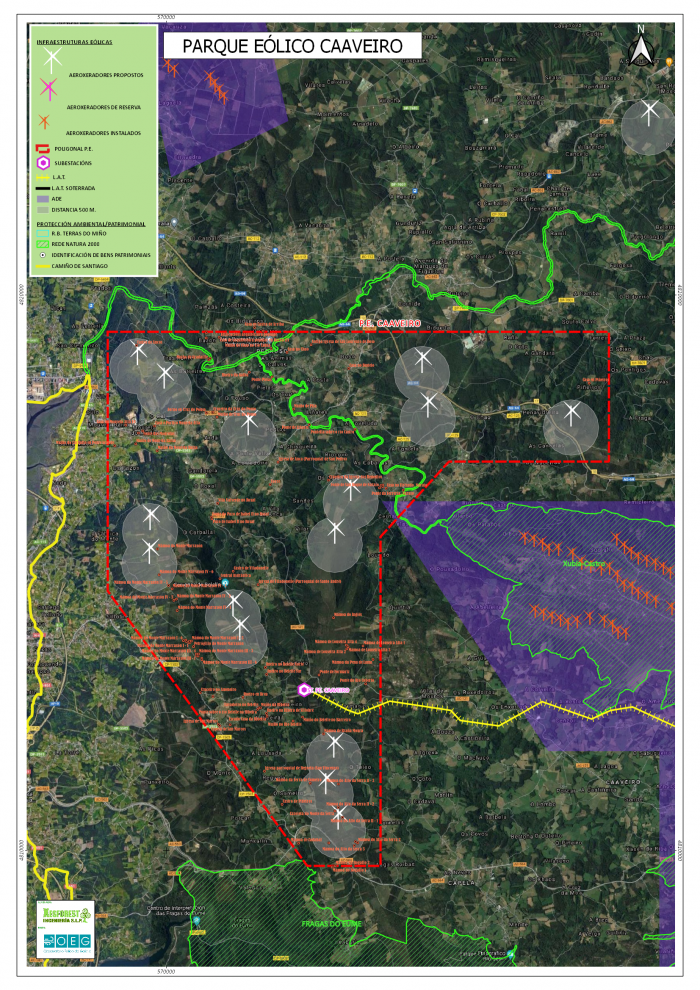 After the closure of the As Pontes de García Rodriguez thermal plant, the aim is to occupy its free evacuation capacity with renewable sources. This is tempting for several developers and has therefore triggered the string of projects observed in this part of the territory. The possibility of linking these investments to next-generation projects, created as of the pandemic, cannot be ruled out as an explanation for this boom in projects.

Although Enel presents the 6 projects separately, this article reflects on the joint nature of the actions. It also highlights the fact that a very significant part of the proposed wind turbines would be outside Wind Development Areas. The presence of “reserve positions” also raises certain doubts concerning compliance with all the regulatory requirements of the administrative authorization processes.

Finally, the territorial impacts of the prospective industries are very significant. The impact of these new infrastructures on landscape and cultural heritage would be severe. Moreover, the effects on environmentally sensitive spaces have also been mentioned.