Wind farms in the Natura Network

At present, wind farms are forbidden within Natura Network areas. Yet this has not always been the case. Until Decree 243/2007 was issued, it was possible to place wind turbines, substations, cable conducting trenches or wind turbine access tracks in Natura Network areas because the Galician Wind Sector Plan (GWSP) established that any rustic area could host a wind farm regardless of its agricultural or environmental values. Both of the decrees within the framework of the PSEG, Decree 205/1995 and Decree 302/2001, on the development of wind energy in Galicia also allowed for the placement of these new industries on rural lands of significant environmental value. As of Law 8/2009, however, new wind farms may no longer be placed within the Natura Network.

What does the GWSP say?

In its initial 1997 document, the GWSP attempted to justsify the social utility and public interest of windfarms by mentioning that the main issue concerning them was their physical location. Furthermore, it indicated that “…they are generally located on soils with productive potential or environmental and landscape protection; this causes a conflict of interest between the need for energy, other uses and environmental protection. In order to harmonize this conflict, the legal system implemented a dense an elaborate network of guarantees that allowed for the installation of these or other forms of rationally exploiting natural resources in different sectors while respecting productive potential or protected land areas”. Indicating that in the case of wind energy ”… it lacks polluting emissions … and its respect for the environment is excellent, making zero impact possible “. In the same vein, it pointed out that “…. the installation of an agricultural or livestock farm on land with special agricultural protection is just as rational as a wind farm in a natural area.”

In its 2002 amendment, this line of argument was insisted upon by signaling that the exploitation of wind energy as a clean, alternative and renewable energy “… is linked to the exploitation of natural resources” for which the Council of the Xunta made an express declaration “… of its compatibility …” with the Rustic Land of Special Protection regime, thereby making wind farms compatible with authorized uses on protected land in Galicia. Moreover, on 11 March 1999 the same Council declared the “… express compatibility of Wind Plans with the sites of the Natura 2000 Network.”

What impact did this regulatory framework have on the Natura Network and on specially protected areas?

As aforementioned, the option of placing wind farms in the Natura Network disappeared as of Decree 243/2007 and Law 8/2009. Thus, the analysis made by the GIEEA in 2013 with data from 2009 is still valid for the purpose of determining the impact of wind power development on Red Natura sites. Following is a summary:

Serra do Xistral, a special case

In this unique area in the province of Lugo, plant communities associated to peatlands occupy an area of over 40% of the habitats of community importance on the List of Community Interest (LCI); the percentage here is much higher than in any other Western European Atlantic territories. Furthermore, the peatland constitute the only habitat on the list of community interest established for the Spanish territory that is exclusive to the Galician territory. Likewise, in Xistral there are 15 seriously threatened species endemic either to Galicia, the Iberian Peninsula or the European Union. 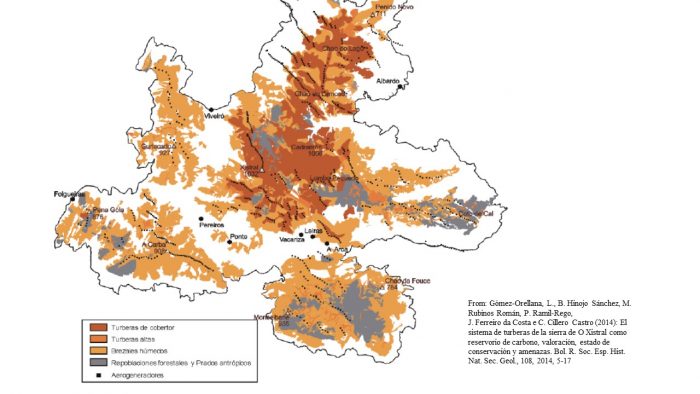 Despite its great environmental relevance, this mountain range is home to 28 wind farms totaling 642.32 MW of power and 835 wind turbines. The first 3 of them (Álabe Soán, Álabe Cadramón and Álabe Nordés) were launched in 1999 whilst the last of them was launched in 2007 (authorized under the umbrella of Decree 302/2001).

Was there an environmental assessment regarding wind farms located within The Natura Network?

The Serra do Xistral, like many other Galician environmental spaces, were included in the Natura Network at the end of 2004. Many of the wind farms in the Xistral were installed before the area acquired this level of protection. In any case, as indicated above, the Xunta de Galicia authorized wind farms within the Natura Network because the sectoral legislation (energy, wind and urban planning) was configured for the procedure to happen.
In this case it is relevant to study the environmental assessment processes undergone by all of these wind farms to conclude on the kind of decisions made in these procedures based on scientific and technical reports. We must emphasize that all the ones installed in the Xistral obviously were subject to environmental assessment according to the regulations in force throughout that period.

All but one of the wind farms submitted to environmental assessment received a positive environmental declaration from the environmental body, the General Directorate of Quality and Environmental Assessment of the Xunta de Galicia’s Environmental Department. Let’s look at this in detailed chronological order.
Between January and June 1998, the first three installed parks (Álabe Nordes, Álabe Soán and Álabe Cadramón) received a positive environmental evaluation from the Xunta de Galicia, and they were developed as planned. The three of them received important allegations by public bodies and environmental and heritage groups. The entities presenting these allegations were: USC’s Department of Soil Science and Agricultural Chemistry; the Official School of Biologistsn of Biologists; Oureol Obradoiro Ambiental; the Ecologist Collective for the Defense of Nature; the Galician Association (ADEGA) for the Ecological Defense and the Erva Group, all of which presented allegations to the Environmental Effects Assessment Study concerning the 3 wind farms; and the Museo da Prehistoria e a Arqueoloxía de Vilalba, which presented allegations concerning the Soán wind farm.

In general, all these allegations stressed:

In addition to these social groups and public institutions, several other General Directorates presented their reports, which were mandatory according to the current processing regulations. It is striking that the three Reports from the General Directorate of Forestry and Natural Environment on each of the three wind farms were against their establishment in the provided areas. Specifically, the General Directorate indicated “… the impact that the works would cause on the so-called covered peatlands is ignored in the environmental study; the marked landscape shifts the wind farms would create is underestimated in the studies; and the few proposed initiatives would not manage to counteract landscape distortion, much less its great spatial scope. Given all of this, they considered the execution of the three parks absolutely incompatible with the preservation of the characteristic habitat of the Serra do Xistral and Cadramón, such as the peculiar covered peat bogs, habitats unique to the Iberian Peninsula that are of crucial interest to the European Community that are. ”
Contrary to the negative reports of the Xunta technicians, however, the environmental body left aside the content of the allegations of these entities and considered the three parks environmentally viable and Galician Ministry of Industry subsequently authorized them. 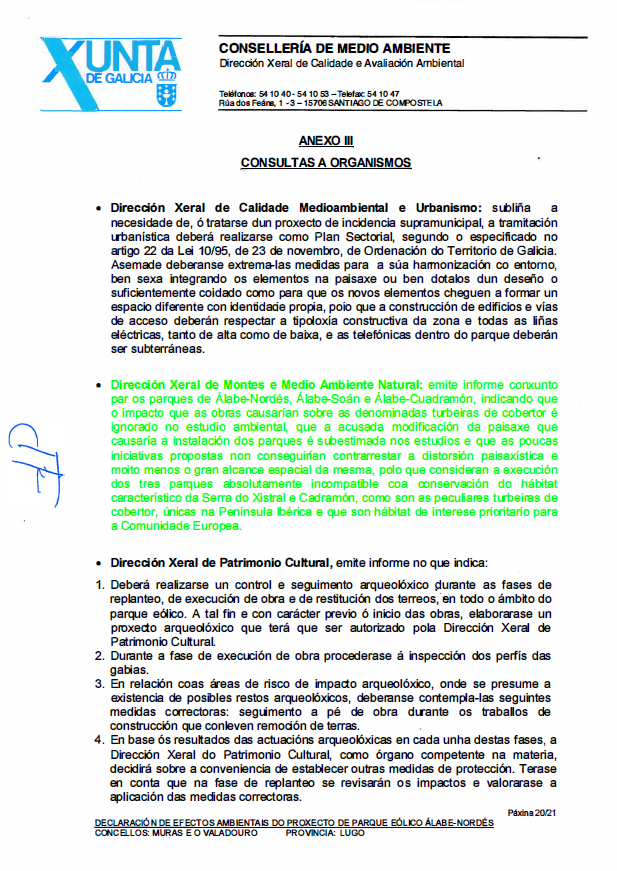 Yet it was 3 years later, in 2001, that a first Galician wind farm that received an unfavorable environmental evaluation. In this case we do not know which private entities participated in the allegations, but once again the report of the General Directorate of Forests and Natural Environment presented the same line of argument as it had done before. In this case, it was the General Directorate of Environmental Quality and Assessment that declared the environmental unviability of this wind farm, and it was rejected.

Is there any lesson to be learned from this?

Some important conclusions should be drawn. Mandatory technical reports of a negative nature ought to be fully considered, and its conclusions should not be contradicted by the environmental body. Secondly, if some ecosystems are about to be included in the Natura Network (as is currently the case of Serra del Suído or the Serra da Groba), the legislator (substantive or environmental body, of the Xunta de Galicia) should be fully sensitive to this fact, accommodate its final decision to that level of environmental protection, and ultimately ban wind farm implementation in the area. These ecosystems already have enough environmental value to be considered a Natura Network. If wind farms are authorized before they have the “legal” stamp of the Natura Network, we would be making an unacceptable use of a legal loophole. Such was the case of Xistral, at least for three wind farms.